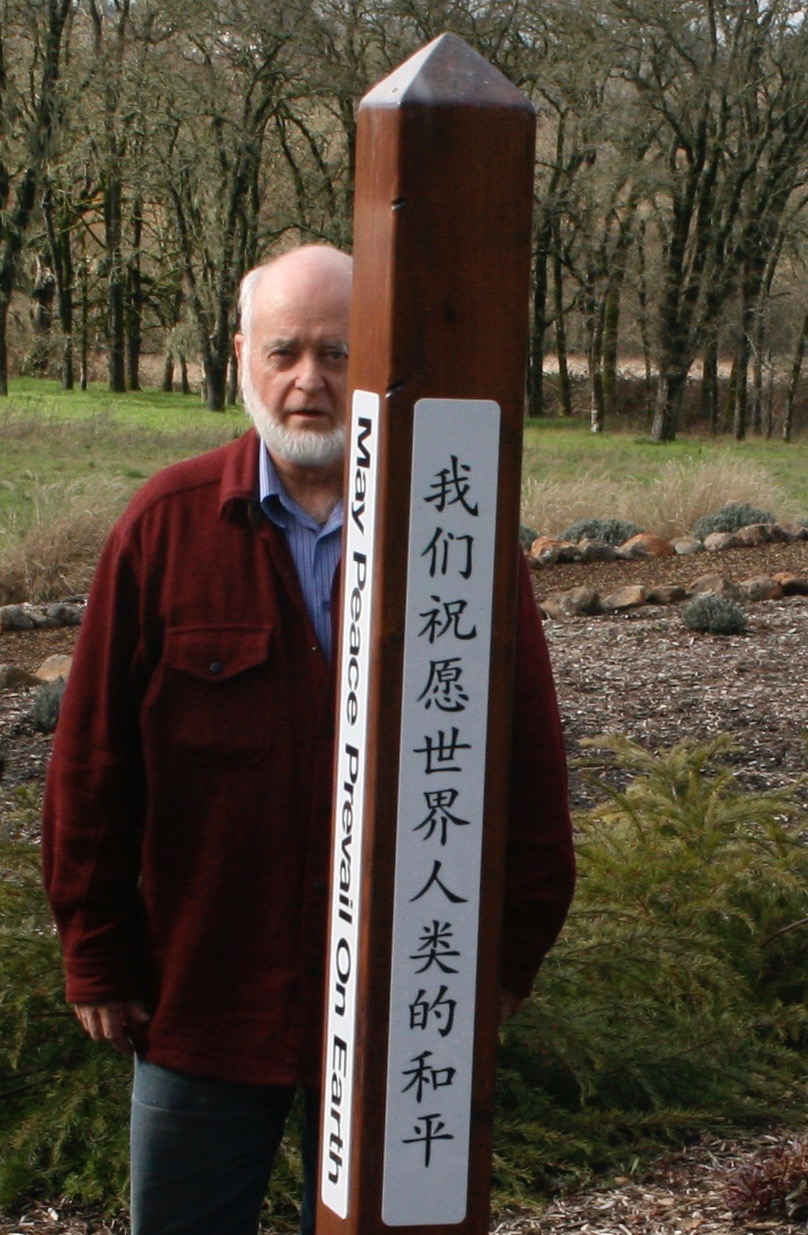 Ever since Jesus pointed me towards Gandhi in response to a death threat, in 1968, I have been dreaming of a Gandhian-style nonviolent “army,” consisting of nonviolent “warriors.” Gandhi’s warriors, satyagrahis (“truth-holders”), trained for 14 years before going into battle against the British, who had little chance against such a disciplined army.  His training was also much deeper. In preparation for battle, they practiced spiritual transformation every morning and every evening. In preparation for independence, they launched a large number of constructive social and political programs.

I think I may have discovered the early stages of such an “army” here in the US. Last week 50 of us assembled for five days at the Green Valley Farm and Mill Retreat Center, ironically just outside the utterly polar Bohemian Grove.  We were welcomed by Redbird, from the local Pomo tribe, sharing some of the history of the Pomo and their neighboring tribes. Our first assignment was to go outside and introduce ourselves to the land. (Since I am waiting for knee surgery, I went only as far as the creek, the lush green meadow and the edge of the dense redwood forest.)

Lynice, author of “Revolutionary Suicide” (think Jesus and Gandhi, King and JFK), a small but fiery African American, delivered a truly passionate challenge from the history of slavery, its subsequent form – Jim Crow, and its current form – mass incarceration.  She had been a pastor for many years, and it was obvious why she chose to leave the institutional Church.

That evening Kazu, founder of East Point Peace Academy, in Oakland, challenged us, in a slow, gentle, yet compelling way, to begin revealing to each other one of our darker secrets. This exercise in vulnerability has the surprising effect of liberating us from some of our shame.  As we realize that all of us have secrets of which we are ashamed, we begin to recognize that all our brothers and sisters are in the same boat as we are, and that it is human to be imperfect.

One morning Lawrence, a grizzled veteran of grounded spirituality, grouped us in pairs within fours, and asked us each in turn to talk to one of our ancestors, with our partner listening as that ancestor:

One African American elder talked to his grandmother, whose father and mother were both slaves.

A climate scientist from India talked to me as her grandfather, who was deeply committed to Gandhi, was beaten severely with bones broken and left for dead, and imprisoned by the British. After freedom, he and many other Gandhians were elected to Parliament. Though many became corrupt and wealthy, he refused and remained poor, much to the frustration of his children and grandchildren. She finally studied her grandfather’s life for herself, and discovered his great honor. Just hearing what she said to me as her grandfather was quite stirring.

A young white American, talked to his father about his decision to march to a different drummer and not take over the family farm. He sobbed broken-heartedly about their estrangement.

I, with my Mennonite heritage, spoke to one of my ancient grandmothers, who in the 16th century witnessed the burning at the stake of one of her beloved Mennonite neighbors, of her immense pain and grief for that neighbor and her fear for her own life and family. I also told her about my death threat and how her faith made it possible for Jesus to show me that I could put my life into the hands of the man who wanted to kill me.

Our nonviolent “army,” which currently still goes by the tag “Yet-To-Be-Named Network,” has two related agendas.  One is to stop global warming, by shutting-down the fossil fuel industry. But global warming is enabled by our othering of the non-white world.  So our other agenda is to heal race relations, partly by establishing reparations, not as charity, but as justice, for Native and African Americans. Panelists from these two oppressed groups addressed us. One of the Natives from Chico shared the story of being asked, “Where are you from?”  Each time she answered, “I’m from here,” the question was repeated, “Yes, but where are you from?” One of the Africans is researching and writing the story of each of the many lynchings of African Americans. She knows that many white supremacists would like to kill her, so she has to be very selective about where she travels.  Wherever she goes, she carries a list of safe-houses in that area.

We looked at a video of a nonviolent occupation of a trench excavated for a dangerous oil pipeline running through a residential neighborhood in Massachusetts. The police had been notified of the occupation plans. But for some reason – maybe workers in proximity and/or rain – the occupiers decided to go to a church instead. When they finished at the church, they discovered the police had left, so they got into the trench. As they were arrested, some of the police quietly whispered in their ears, “Thank you (for trying to protect our community).”

Chris, author of “The Gandhian Iceberg,” which lays out the deeper structure of a Gandhian “Army,” led us into a profound discussion around deceiving the police. Did they trick the police? Should they have refrained from deviating from what they had told the police they would do? I mentioned that Gandhi’s policy was “We have no secrets,” and that the analysis of the 300+ revolutions of the 20th century, “Why Civil Resistance Works” (Chenoweth and Stephans), reveals that winning the trust, and the hearts and minds, of the police has been essential to the success of quite a few of those revolutions. At that moment, a young woman began to speak, and to sob, about her deep longing to reach out in respect and solidarity and build relationships with the police, and with all our opponents.

I don’t remember who, but one of our presenters, described an occupation of a governor’s office by a small group.  The police were standing, surrounding the occupiers.  Because the governor was out of town, no one knew what to do.  After a number of hours, a supporter of the occupiers ordered pizza, to be sent in for them.  So the occupiers offered to share it with the police. One officer did accept (and was later transferred to the lobby, where he may have described what was happening inside, which may have furthered the cause of the occupiers). The occupiers began to sing, and to pray.  When they began to pray for the officers’ colleague who had been killed on-duty a few days earlier, tears began to roll down the faces of the officers surrounding them. Empathy can move mountains.

Because this yet-to-be named network will be collaborative, consisting of small, autonomous teams (not individuals), for the past year a core team has been building the network’s DNA, that is, a clear statement of its purpose and its values. The network is self-organizing – any team that lives by this DNA is part of the network.  But the DNA is considered unfinished, and can also evolve in the future, based on our experiments, experiences and conversations.  The 50 of us who gathered last week had each worked through a fairly extensive list of readings and other exercises, and an hour-long interview with one of the core team. So this retreat was considered the launch of the network, and the on-boarding of its initial teams.

To finish this first version of our DNA, we chose the people we thought most suited to such a task. We wanted a variety of genders and races and ages (which varied from about 10 to 80).  But the choosing was utterly unique.  The last afternoon we all put on our name tags again, stood in a circle in silence, held hands, slowly walked in a spiral inward, then spiraled back out, pausing to look deeply into each person’s eyes.  Then, still in complete silence, we each filled out a “ballot” with our name, whether or not we were willing to serve (5 hours/week, culminating in a 10 day retreat in March), and our seven choices. This was clearly not a popularity contest, but rather a communal search for vision and fearlessness, wisdom and fierce vulnerability.  (I noticed that many of the 50 welcome criticism and are equally prepared to offer it. Their highest value seems to be truth. Gandhi is smiling).  The result, announced the next morning with drama and humor, is a group of 12 – 6 female, 6 male, 2 African American, 1 elder. It felt a little like witnessing the choosing of the 12 Apostles.

The last evening Lawrence led us in a grieving ritual, like nothing I have ever seen.  He had laid out a border of greens and candles separating the grieving area from the “village.” In the grieving area, there was a long low altar, or maybe I should call it a wailing bench, with another line of candles. He invited us to think of those for whom we grieve, including ourselves, then when ready, leave the village and come forward toward the altar and kneel or prostrate ourselves to grieve.  He gave everyone permission to mourn or cry or shout. Lawrence taught us a simple seven line chant, then, with an assistant, began to drum slowly. At first no one went forward. But then one, or two, or three began to grieve. As each person began to move forward, one of us would follow, to back up and be present, and to comfort or hold them as their grief ran out.

Some grieved silently, some shouted, some jumped, some threw imaginary stones. Some grieved for two or three minutes, some for 20 or 30 minutes. I grieved silently, first for my cousin who committed suicide when she was just 28, then for two people who had wounded me deeply in the past and then had died prematurely (cancer, heart attack).  As we returned to the village, we were greeted with a massive hug from many villagers. After a while, the drumming began to accelerate, and the villagers began to sway and dance as they sang.  After a full hour, the drumming and the dancing had reached a frantic pace. When the last person had finished grieving, the drumming began to slow. When it had stopped, we all stood in one large embrace and very slowly sang the chant one last time. Then for several minutes there was complete silence, stillness, and reverence.

Our on-boarding ended as it had begun. We each went out to say farewell to this beautiful land we were borrowing from our Native American ancestors.