How Long Can We Have Our Nukes without Having a Nuclear War?

Posted on May 1, 2021 Posted By: Stanley Categories: Disarmament 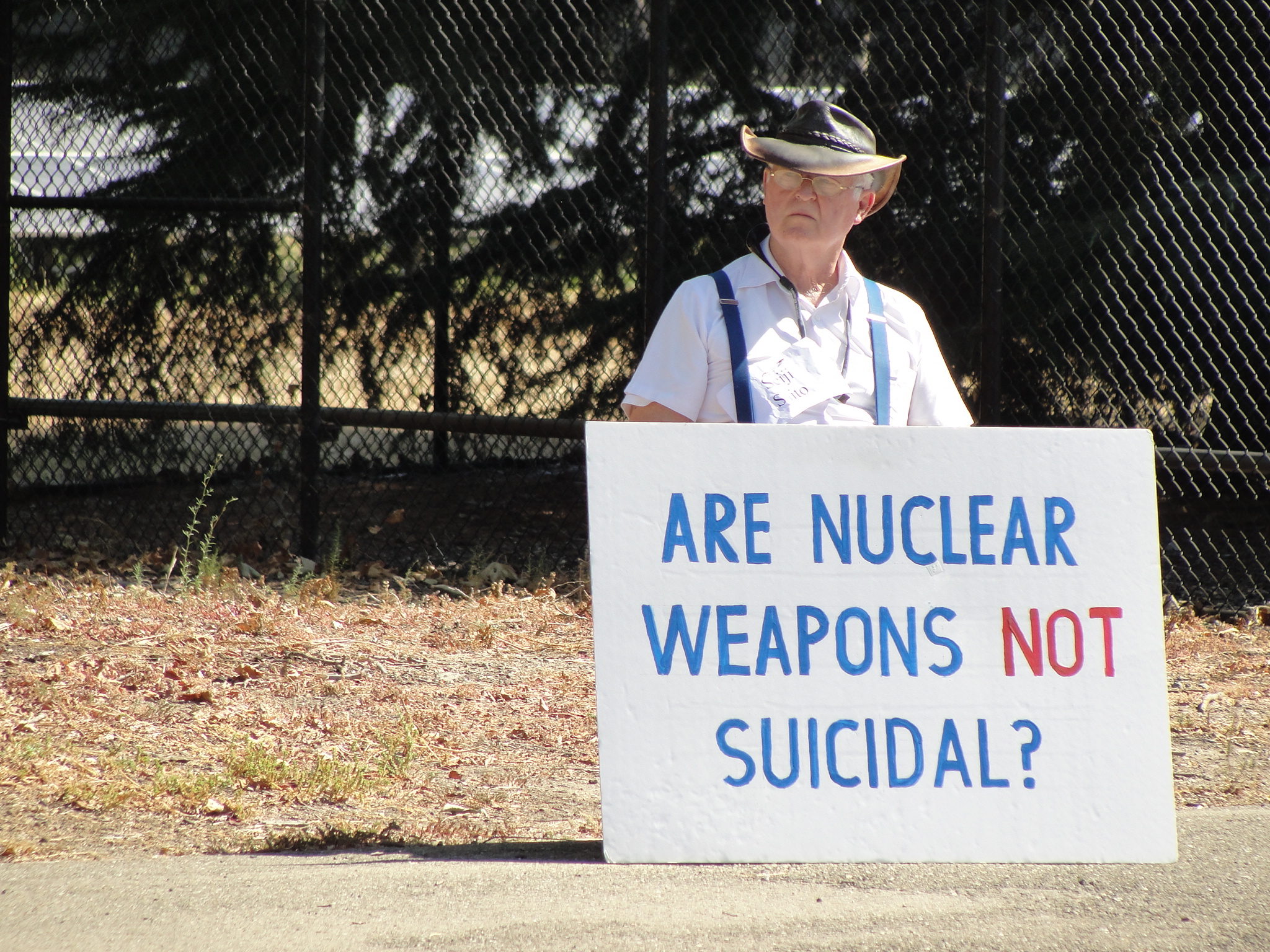 Editor’s Note: This is the first of three blog posts by Lorin Peters that, together, challenge us about feeling secure when the nuclear threat is so high. This first talks about the slippery slope we live on while nuclear weapons still exist and are proliferating. The second is a frightening description of what a nuclear war will entail, told from the perspective of someone living in San Leandro, California. The third is an attempt by Lorin to identify what will be the way or ways we can get our of this mess.

My Dad worked on the Manhattan Project, the first atomic bomb. I understood nuclear chain reactions and critical mass at age 12. At UC Berkeley, we read John Hersey’s “Hiroshima.” In 1962, my French TA rushed into class, “A nuclear war is about to begin over Russian missiles in Cuba. Class is cancelled.” The 30 years that I taught high school physics, 1971 – 2001, we always discussed nuclear weapons. In 1982 I spent several days in Hiroshima. In my dreams I saw incoming nuclear missiles over the Berkeley hills.

Martin Hellman, Adjunct Senior Fellow for Nuclear Risk Analysis, Federation of Atomic (now American) Scientists, recently published a paper pointing out that continuing possession of nuclear weapons makes nuclear war inevitable. It is possible that someday Congress will authorize a nuclear war with Russia. It is far more likely that it will happen by accident.

During the Korean War, a good friend, Louie Vitale, was ordered to shoot down an incoming Russian bomber over Alaska. Fortunately, Louie decided to do a fly-by first. It turned out to be an American airliner. During the Cuban missile crisis, a Soviet submarine commander had orders to launch a nuclear torpedo at an American warship. Fortunately, he refused his orders. In 1980 a US missile carrying a 30-megaton warhead exploded in its silo near Little Rock, Arkansas. 30-megatons is 2,000 times the power of the bomb that destroyed Hiroshima. Had its warhead detonated, the fallout would have killed much of New York City, not to mention everything in-between (see the documentary “Command and Control”). That same year, to resolve the Iranian hostage crisis, candidate Ronald Reagan suggested nuking Tehran (Iran). In 2017 Donald Trump suggested nuking Pyongyang (N Korea). The following year, he lowered the threshold to nuclear war with lower power warheads, and abandoned a helpful arms control treaty with Russia.

In the future an egotistical or ignorant American President may decide to actually push that “red button.” Or it could be a Russian mistake or miscalculation or accident or ego or ignorance. Or it could be a rogue nation, or a rogue military commander, or a terrorist group. Someday our good luck will run out.

Hellman says, “Even if nuclear deterrence could be expected to work for 500 years before we destroy ourselves… A child born today in America would have roughly one chance in six of being killed by a nuclear weapon over his/her expected lifetime — the same (odds) as in Russian roulette”. In each future century the odds of nuclear war by mistake are about 20%. I pray my grandchildren are not still alive when this accidental nuclear war finally happens. But eventually it will happen to us and/or our descendants.

Even without Trump or Chairman Kim, it is not hard to imagine the US and China beginning an exchange of nuclear warheads. Let me assume the best we can possibly hope for.  Assume that many of China’s 290 warheads are disabled in a US first strike (We have deliberately declined to commit ourselves to any no-first-strike policy.)  And assume, optimistically, that our THAAD (Terminal High Altitude Area Defense) anti-ballistic missiles actually do manage to disable all of China’s remaining incoming warheads, ie, no warheads strike the US.  I will also assume that we target no more than their 290 nuclear warheads.

A “small” nuclear war, involving the detonation of just 100 Hiroshima-sized (15 kiloton) atomic bombs is estimated to inject 5 million tons of smoke into the stratosphere, which will persist for perhaps 10 years. Computer models estimate this amount of smoke will block 7-10% of our warming sunlight. Average temperatures will accordingly be colder than any during the last thousand years. Growing seasons will be shortened by up to 30 days. Rainfall will decline by 40-50% in some areas. Grain producing nations will probably stop exporting. Prices will skyrocket. Hoarding will occur. 700 million people now on the edge of starvation, and hundreds of millions more who depend on grain imports, will die. The death toll could be one, or even two, billion. That’s perhaps 20% of our human species.

The socialist economies may be prepared to distribute what grain they have equitably. The American economy is not so disposed. I fear that we Americans may also lose 20% of our population (~65 million), because our great “wealth” is not distributed. The only US leader who understands this nuclear winter famine, as far as I can tell, is former Secretary of Defense William Perry.

That is the best scenario. The reality will probably be far worse. Ballistic missiles travel half way around the earth in about half an hour, just like satellites do. If one side fires first, the other side has only that half-hour to fire back before many of their launchers are wiped out. When we and the Russians someday blunder, by any of the above scenarios, into a nuclear war, it will probably involve the detonation of at least the 2,000 Russian and the 1,700 more-accurate US warheads currently deployed. That will result in death by heat, blast, fire or radiation of at least several hundred-million people. The other 95% of our human species, and other large species, will starve to death over the next few years. Less than 1% of us, maybe a few Mennonites who know how to grow winter wheat, and how to form beloved community, might possibly survive. When essentially everyone is dead, who is the winner? Are nuclear weapons not suicidal?

There is a much better alternative than nuclear suicide. Negotiate the abolition of all nuclear weapons. Even Ronald Reagan could do this, with his “Trust, but verify” policy. When everyone survives, everyone is the winner.

I have written, and am handing out, this warning out of concern for my grandchildren, and everyone’s grandchildren. I’m also doing this in solidarity with my good friend Steve Kelly, SJ, who has done 12 years in prison for repeatedly attempting to disarm nuclear missiles.

Some of you may have seen the San Leandro Times story, 2019 July 11, front page, about what I’m doing at our BART station. If you would like to talk, you can find me there twice a week during evening commute hours. And you are welcome to email me. If I am slow to reply, it’s because I read “legions of email,” and try to respond helpfully.

Related articles I have written and carry with me:

– “When Our Final War Has Begun,” appropriate only for those who are reconciled, spiritually and/or psychologically, to our own mortality and the destruction of all for which we have worked.

Articles I carry by others:

– “The Threat of Nuclear War is Still with Us,” William Perry et al

– “The World According to Trump, Or How to Build a Wall and Lose an Empire,” Alfred W McCoy

– “Treaty on the Prohibition of Nuclear Weapons,” United Nations